A Bridge of Hope Built on Pillars of Technology

Error: unable to play the video

The history of healthcare in India has been riddled with challenges -- both bureaucratic and systemic. It has been marked by a lack of accountability, a poor funneling of resources, and non-optimal use of infrastructure that saw limited intervention of technology in healthcare. But not anymore.

The Ayushman Bharat-Pradhan Mantri Jan Arogya Yojana (PM-JAY), a technology-enabled nationwide program led by the government of India and executed by TCS, has brought to life the vision of a healthy and robust India where medical care is available and accessible for free to society’s least privileged. The Ayushman Bharat scheme empowers the poorest 40% in India’s population with quality secondary and tertiary healthcare by a funding of Rs 5 lakh (USD 6,600) offered to every such underprivileged family per year.

Bolu Omble, a porter by profession, could no longer lift weights and was rendered bed-ridden and jobless for not being able to afford knee replacement surgery. His local government representative goaded him into applying for the PM-JAY program. Omble not only qualified, but his surgery was done within a week of him submitting the request. This digitalization of healthcare via the platform not only helped expedite Omble’s qualification process, but also streamlined the chain of medical activity -- from diagnosis to surgical intervention to post-operative recovery. Yes - his treatment included physiotherapy. 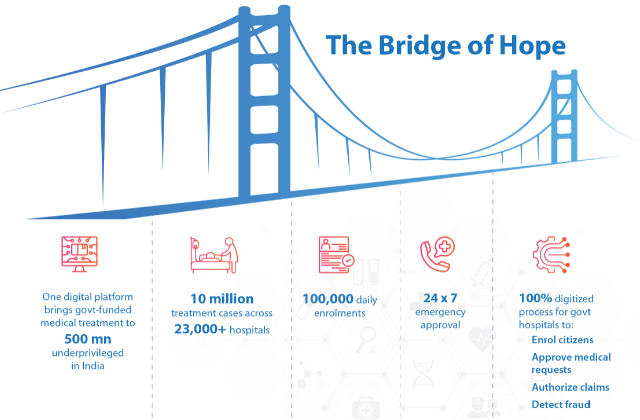 This digital transformation story of healthcare in India has seen TCS architect a technology-led program that aims to connect 500 million citizens like Omble to a nationwide network of hospitals via a single comprehensive process -- from registration, to cashless hospitalization, to discharge. Typically, this connectivity would be pockmarked by reams of documentation, a slew of sub-processes, and multiple physical interventions at every stage. Now, this reimagined digital healthcare solution brings together central and state medical facilities to enrol citizens, empanel hospitals, process medical claims, generate auto approvals, and detect fraud.

The numbers that have emerged from the Ayushman Bharat story tell a tale of their own.

This reimagination of medical access in the form a digital healthcare solution took flight across over 23,000 hospitals, 32 states plus Indian Union Territories, bringing under its wings 120 million citizens.  To put it in a simpler perspective: There are now a 100,000 daily enrolments, and treatment cases have crossed the 10-million mark since the program’s launch in 2018. This is no mean feat for a nation that still largely lives in its villages but is booming in terms of digital capability and tech awareness in a population dominated by youth.

With real-time, 24x7 emergency approval, and a newer culture of transparency and accountability in medical processes, the Ayushman Bharat story shows how technology can breathe life back into systems deadened by legacy and hold up erect a bridge that brings hope and healthcare to those that most need it.