For most of us, insurance isn’t one of the most exciting subjects to discuss. It’s reams of written fine print that calls for serious patience and comprehension abilities. It also used to be a string of processes between the insurance company, the agent, and the customer along with financial intervention in the form of cheque payments towards premiums. Let’s face it. Once we’ve zeroed in on an insurance plan that suits our needs, we just want to get it over and done with as quickly and seamlessly as possible and safe in the knowledge that when a crisis hits, we’re covered.

A process that demanded time, attention and significant manual intervention, the act of acquiring an insurance has now been simplified to a large extent thanks to digital technology developed in the last decade or so. This transformation of the insurance industry has played out at several levels be it in terms of signing up new insured, settling claims for existing insured, on-boarding new agents to facilitate new policies and programs, revamping internal workflows, or consumer grievance redressal. 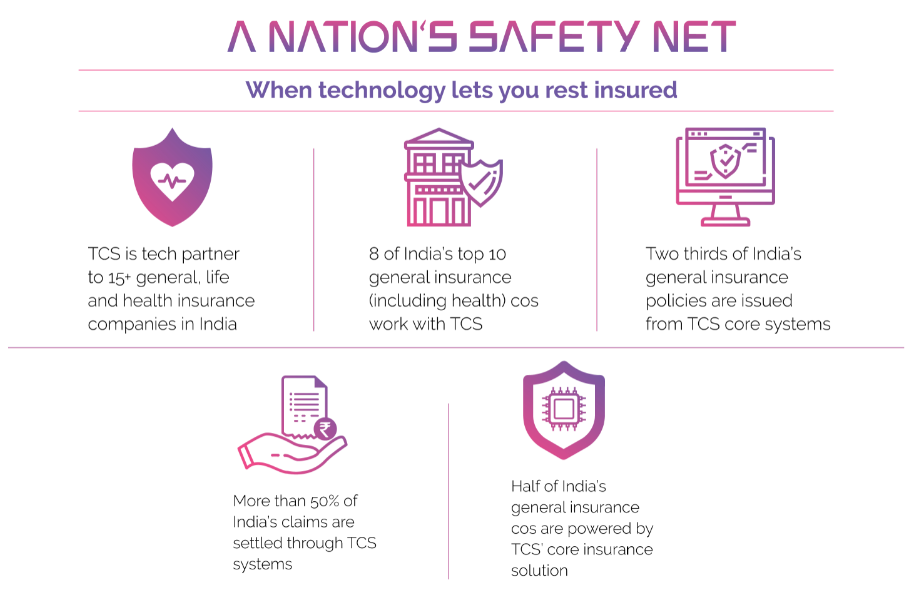 Some of these key transformation elements in the general insurance industry see the use of cloud technology, artificial intelligence, automation in underwriting, and a modernization of the insurance workplace to where your claims get settled faster and in far less complicated ways, making a difference in the lives of customers and their kin.

The insurance industry transformation has evolved from the inside out with TCS emerging as a strong growth and transformation partner. TCS’ BaNCS platform has played a major role in automating the insurance process end-to-end. A rule-based automated underwriting system and automated risk assessment are other key features of the solution that has accelerated the turnaround times.

Technology also folds into the next layer of the insurance universe with the creation of a unified digital platform. This brings together all stakeholders, including those in sales and lifecycle management, and comprising agents, banks, aggregators, and customers. Insurance chatbots based on AI that help address customer concerns as well as general housekeeping queries and adapt to their queries are no longer unusual.

Apart from incorporating technology to better the performance of existing industry players, TCS has been instrumental in building technology ground-up in a greenfield set up for a slew of newer insurance companies. The last two decades have seen TCS emerge as a powerful growth and transformation partner to several Indian insurance companies; today, it is the digital ally to over 20 such companies.

In a broader sense, TCS has played an integral role in the ‘technologizing’ of an industry, per se. With more than 50% of claims being settled through a TCS-led system, most of India’s insured found themselves covered by a tightly woven digital safety net.

An Eye To The Sky