scrollUp_icon_icon
Over the past Essential Takeaways

Over the past half-decade, digital technologies have profoundly changed how the global media and entertainment industry does business, and the COVID-19 pandemic has accelerated the trend. How Media & Entertainment organizations are planning to balance radical innovation with incremental optimization in the following arenas.

To understand the answers to these questions, Tata Consultancy Services surveyed 1,206 senior executives from Global 2000 companies with average revenue of $13.9 billion, including 26 companies with sales of $100 billion or more. In addition to the media and entertainment sector, TCS surveyed 16 other sectors. The survey was conducted in the first half of 2021 in four regions of the world: North America, UK and Europe, Asia-Pacific, and Latin America.

This report is based on surveys with 62 media and entertainment companies with average revenue of $8.2 billion. About two thirds are between $1 billion and $5 billion, and the remainder are more than $5 billion. A slight majority (56%) are based in North America, and 31% are in the UK and Europe. Another 10% are in Asia-Pacific, and 3% are in Latin America.

Our survey participants were roughly evenly distributed among four subsectors: print and online publishers of traditional media (newspapers, magazines, books; 15 respondents), broadcasters (17), internet publishers (15), motion pictures/streaming video (11), and business and consumer data suppliers (4). The study also compares how two groups of respondents answered our questions: “Leaders” and “Followers.” Leaders were those media & entertainment companies that had higher-than-average increases in both revenue and profit between 2015 and 2019.

Media & entertainment firms also weighed in on what they believe will be their company’s most important cultural values. 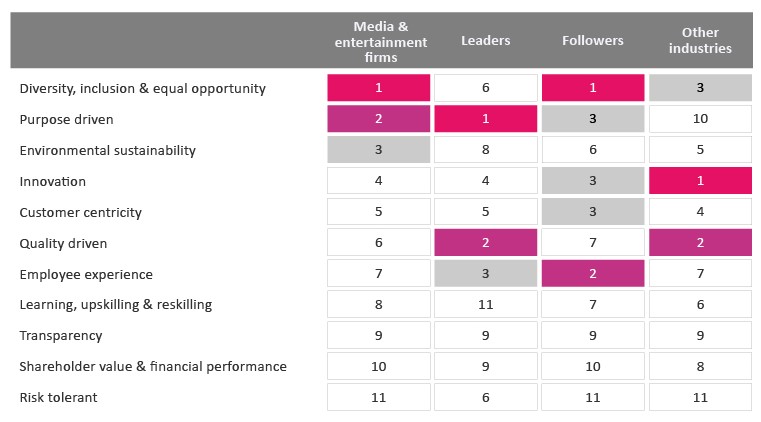