In this report, data from the surveys of CIOs in the banking, financial services and insurance (BFSI) industries (243 companies) is compared against the overall survey data (1,010 companies) on such issues as success in transforming business models and offerings to meet digital opportunities and challenges; how digitally adept senior BFSI management and boards of directors are; and what kind of data BFSI CIOs think will help drive future revenue growth, compared to the views of CIOs in other industries. Where differences in the data were notable, separate results for banking/financial services (B/FS) and insurance are reported.

Additional reports will look specifically at the consumer packaged goods, retail, and media, entertainment and information services industries, as well as the viewpoints of CIOs at North American and European firms.

■  Banking and financial services firms are only slightly ahead of other kinds of companies when it comes to self-reported success in digital business—despite being farther ahead than other industries in almost every area of digitizing their operations.

■  Perhaps given the role of IT in daily banking and financial operations, CIOs in this industry were more likely to be tasked with managing the current IT environment than CIOs in other industries.

■  Among the greatest distinctions between these Digital Leaders and the rest is where they develop new digital businesses, products, and service offerings: in the IT department. Less successful companies say they’ve moved such work out to separate business units or even into other business functions.

Nearly a quarter of the 1,010 CIOs we surveyed worked for banks, financial services firms or insurance companies

Most of the B/FS success comes from Europe, where there were 1.4X more leader companies than followers; it was a 1:1 ratio among BFS companies in North America.

In comparison to other industries, banks and financial services firms rank slightly above the middle in terms of their success to date with digital business, as self-reported by their CIOs. The insurance industry, however, has some catching up to do.

More Digital Experience on Bank Boards and Among Top Executives

CIOs at banking and financial services firms say they have a higher percentage of digitally experienced board directors and management team members than other companies do.

The insurance industry seems to have somewhat less digital experience among its boards and top management. However, Digital Leader insurance companies report such experience roughly on par with the average banking and financial services firm, and ahead of the average company in other industries.

Asked whether they think other key stakeholders in their organization agree with their vision of digital-related growth opportunities, banking, financial services and insurance CIOs showed a slightly lower degree of alignment, overall, than CIOs in other industries.

For example, BFSI CIOs said they were aligned with the CEO, line-of-business heads, and functional C-suite leaders 4 to 5 points behind what their colleagues in other industries said.

Only with the members of the board did BFSI CIOs have slightly more agreement than did other industries’ boards and CIOs. When asked how their board directors and top management view future digital business opportunities, CIOs in BFSI say they have broad views on what is possible.

Almost two-thirds (63%) said the board and top management think expansively or very expansively about the business opportunities in a digital world. This is significantly higher than the 48% of boards and executives in other industries.

Within the BFSI sample, 69% of CIOs at banks and financial services firms said their boards and management think expansively or very expansively, compared to 57% at insurers. Even among Digital Follower banks or insurance companies, at least half of CIOs said their corporate leadership was thinking expansively about digital business—more than in other industries in general.

BFSI Firms Less Optimistic About Digitization Opportunities Than Others

While more than half of BFSI CIOs said their boards and top management held expansive views about their firms’ digital futures, a sizeable percentage of these IT leaders (42%) said their companies see “limited opportunities to further digitize our business.” For insurance industry CIOs, the percentage holding this view was even higher.

Many CIOs described modest progress in digitizing their businesses—at least that’s how they would characterize their executive colleagues’ views. Notably, about a third of BFSI Digital Leader companies feel they are still in the nascent stages of their transformation journey—despite reporting success already in digitizing much of their business and already earning revenue from digital products and services.

Among BFSI Digital Follower companies, however, the mood is much darker. Over two-thirds think there are limited opportunities for further digitization of their business—and 70% think so among the insurance industry followers—even though these companies report less success to date in digital business than other companies in their industry, so might be expected to see even more opportunities for digitizing their businesses.

Insurers Have Much More Digitization Work Ahead of Them

Perhaps owing to the already digital nature of much of their business, banking and financial services CIOs said their companies’ businesses were more digitized than did CIOs in other industries. They have higher levels of digitization in just about every area of the business.

At the same time, insurers lag other industries in digitization of their businesses. In fact, they had the lowest scores of any industry for digitization of IT security—a risk CIOs seem to acknowledge by noting that information security and ITSM processes have the most progress to make at insurance companies between now and 2030 (from 38% digitization to date to an expected 79% by 2030). By contrast, bank and financial service CIOs say that nearly two-thirds of IT security work is already digitized in their environments. 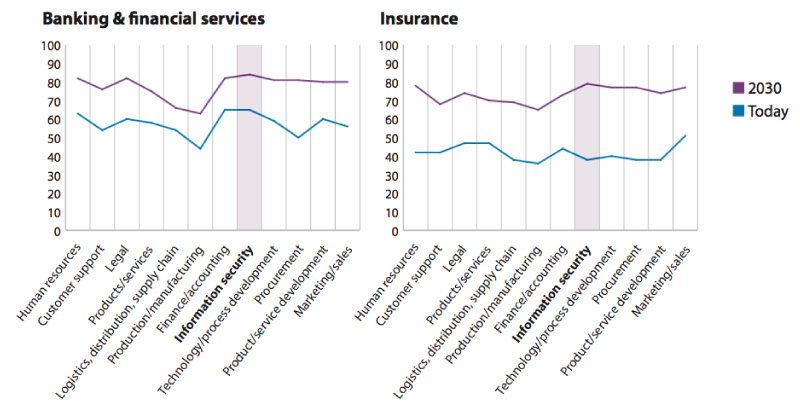 Otherwise, CIOs at banks, financial services firms and insurance companies will be focusing on digitizing procurement and vendor management in the next few years where, for them, the gap is largest. (For other industries, the gap between the current state and the 2030 goal is largest for human resources, which is 4th on the list for BFSI.) Digital Business Offerings Accounted for Half of BFSI 2018 Revenue

While CIOs at banking, financial services and insurance companies may be modest about their progress in digitizing their business, many have made real gains.

Only Digital Followers—across all companies surveyed, including the BFSI industries—had less than a 10-point increase in the percentage of revenue accounted for by digital products and services. At the same time, BFSI CIOs—and this was true in both the banking and insurance industries—were more likely to say they had been the primary driver of digital transformation efforts at their firms, which exceeds the leadership of CIOs in any other industry.

More than their counterparts in other industries, banking CIOs are more likely to be managing the current, legacy technology of their companies. Given the industry’s reliance on its IT systems for its day-to-day—and even microsecond-to-microsecond—operations, it’s no wonder.

At the same time, CIOs in BFSI are also less likely than those in other industries to lead any other one particular area, from IoT development and research on emerging technologies to end-user tech support. Notably, Digital Leader firms in both banking and insurance have CIOs focused more on data security and analytics than does the BFSI industry as a whole. And leader insurance company CIOs are more likely to be focused on end-user tech support (45%) than at any other industry’s leader companies except for industrial manufacturing (at 67%).

(Overall, BFSI CIOs say they average a near 50/50 balance of their time spent on legacy IT versus digital business model innovation, same as CIOs in other industries.)

The IT Function at BFSI Leader Companies: Where Innovation Happens

Where digital innovation happens in a company is the issue that separates BFSI CIOs from their counterparts in other industries most starkly.

In BFSI companies overall, new digital businesses and digital products and service offerings are less likely to be developed in the IT function than in either a separate business unit reporting to a corporate or a divisional head or in a business function such as marketing or sales.

In sharp contrast, such innovation is more likely to occur in the IT department at a BFSI Digital Leader firm. (It’s even more likely to be there than in the IT departments of leader companies in many other industries: 70% at BFSI leader companies vs. 63% at all leaders.) Among all 1,010 study participants, the IT function hosts such innovation efforts in 42% of companies—compared to 46% doing so in a separate unit.

Where is new digital business developed?

The TCS 2020 CIO Study asked senior IT executives in 11 industries about their work, their company’s digital success, and where they’re focused strategically for the future.

Of the 1,010 companies surveyed, 24% (243) were banking, financial services, and insurance companies.

The revenues of the BFSI companies in our study ranged from half a billion to more than $50 billion dollars.

The IT budgets under the CIOs in these companies ranged from less than $25 million to more than $1 billion.